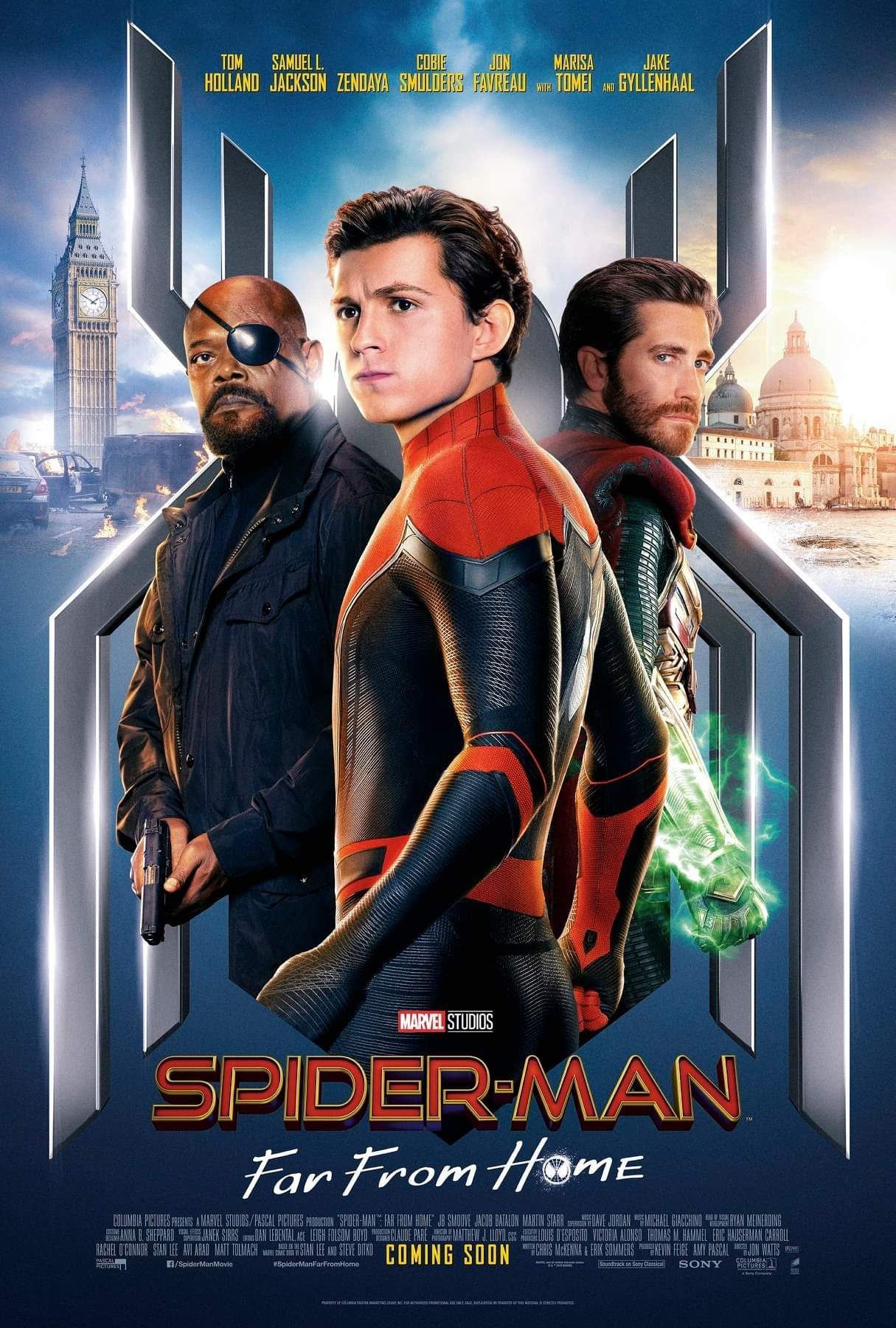 'Spider-Man: Far From Home' is the twenty-third film in the Marvel Studios Cinematic Universe, the concluding chapter in their third phase of films, the fifth film to feature Tom Holland as Peter Parker / Spider-Man, and the second installment of this third live-action film iteration of the character. In short: 'Far From Home' is a sequel to 'Spider-Man: Homecoming' and a direct follow-up to 'Avengers: Endgame', meaning that if you are one of the (apparently few) people who didn't see 'Endgame' (and statistically speaking you probably did, as it made a colossal $2.7 billion worldwide), 'Far From Home' will spoil almost all of the major twists in that film - and so will this review, so be warned.

With Planet Earth saved after the Universe-shaking events of 'Avengers: Endgame', everyone is still trying to adjust to the five years that technically never were. Those "snapped" by Thanos are back living the lives they left, but with everyone around them five years older. Peter Parker and his friends embark on a school trip around Europe, but whilst Peter wants to have a fun time with his friends, Nick Fury contacts him about a new Spider-Man mission. The world is (yet again) under threat, this time from the Eternals - beings from another world, pursued by Quentin Becke / Mysterio, who needs Spider-Man's help to stop them for good. Will Peter being able to save the world with Mysterio? Will his school trip ever not be interrupted by elemental beings? And, most importantly, will he finally be able to ask out MJ?

If there's a rather major criticism I have with 'Spider-Man: Homecoming', it's the confusing character development. Peter Parker's arc is less about "with great power comes great responsibility" and more about him trying to be an Avenger, which whilst endearing lacks any real emotional weight. If Peter doesn't stop the Vulture, what are the stakes? There really aren't any - bar bruising Iron Man's ego - which makes the film feel quite uneventful. 'Far From Home', meanwhile, is more focused on the inner conflict within Peter - wanting to be a normal teenager hanging out with his friends and also feeling responsible for the world around him. With Tony Stark / Iron Man dead, Peter feels obligated to live up to the pressure of being a superhero, and he simply doesn't feel ready. In Mysterio, Peter sees a new Iron Man figure, someone to handle the mantle of Earth's protector whilst Peter can hang out with his friends, but is Mysterio really the man for the job?

The ultimate plot revelations may be obvious - and anyone familiar with the character of Mysterio will instantly catch-on to the twists here - but the film manages to hold itself together by centering on Peter Parker's conflicting lives. He constantly has to choose between responsibility and having a normal life, and whatever choice he makes will always feel like the wrong one.

If the film sounds incredibly focused though, it sadly isn't. There's a large ensemble cast here, and few of them really get much to do. Despite being absent from many key events in earlier films, Nick Fury and Maria Hill return here but without any real reason. Is SHIELD still a thing? It's a confusing plot element that is never explained, neither is their influence. I'd even argue that both Fury and Hill's guest roles here are pretty superfluous, and seem to be more like glorified cameos as opposed to important characters. That's not to say that they're completely useless, but the film raises a great many questions with their presence than it answers. Moreover, their involvement also reduces Mysterio's role in the first half of the film, so much so that when the big twist arrives...it doesn't mean nearly as much as it perhaps should. Mysterio's whole character is a plot-spoiler, and one I'll avoid for now, but Jake Gyllenhall just about manages to sell a very difficult, and somewhat underdeveloped character.

There are some really fun scenes with Peter and his classmates, but they feel less like a Harry Potter-style ensemble and more like supporting players. Peter has some fun interactions with Ned, who is constantly distracted by his new girlfriend Betty Brant (played by a still somewhat wasted Angourie Rice), but perhaps the best scenes are between him and MJ. Tom Holland and Zendaya have wonderfully awkward chemistry, and are very believable, making the film's conflicts more interesting. That being said, the love triangle element with another student felt a little forced, and the film often contrives ways to further that storyline unnecessarily.

Director Jon Watts returns from 'Homecoming', and whilst his directing style is still quite bland and generic, there are some impressive moments sprinkled throughout. Watts doesn't seem to really have a distinctive style, being neither minimalist nor extravagant, and often resorts to bland medium close-up cutting to reverse medium close-up shots. I'd argue that it's the visual effects team making the action set-pieces more interesting, but perhaps Watts has learned a lot from making 'Homecoming'. The visual effects work is very mixed, and whilst nothing looks as shockingly awful as some of the effects work in 'Homecoming', some of it still looks very rubbery and fake. Despite making lovely Spider-Man costumes, the production often favours CG doubles, even for close-up shots. Quite why they can't just shoot a close-up of Tom Holland in costume against a green-screen I have no idea.

Unsurprisingly, the Spidey suit's AI interface Karen doesn't reappear from 'Homecoming', but the over-designed "Iron Spider" costume from the two-part Avengers epic thankfully doesn't feature too much. Mysterio's costume feels somewhat over-designed, but does adhere closely to his classic look, so I shouldn't be too critical. I'd like to see more cartoonish Spidey villains in future though.

All this being said, I've found it incredibly difficult to work out exactly what I want to say about 'Spider-Man: Far From Home'. I originally wrote this review immediately after seeing it, but really didn't know how to conclude my thoughts. In a nutshell: it's a good film, and worth seeing at the cinema. There are a number of issues I have with it, many of which I can't discuss without tackling spoiler territory (and I want this to remain a spoiler-free review of the film), and I feel somewhat apprehensive about revisiting the film - will it hold up better upon repeat viewings, or will it start to crumble apart? I guess my ultimate issue is that I find Marvel Studios' Spider-Man films to so far be "good enough", and neither of them push the boat out in terms of style or substance, both of which were captured in Sam Raimi's original Spider-Man films, and in last December's 'Spider-Man: Into the Spider-Verse'. I'm intrigued to see where the story goes, but I'm on board for a fresh approach with the next film, continuing the story perhaps with a new writer/director who can push the envelope. I don't dislike what Watts and his writers have done so far, but I feel like they've been playing it too safe, and with a such a brilliant cast and amazing stories to work from, I'd like to see them pushed further. 7/10

Also, the posters for this film have been terrible. Make better posters next time.
Marvel Cinematic Universe Films & Television