Showing posts from April, 2013
Show All

Doctor Who: Journey To The Centre Of The TARDIS (2013)

April 28, 2013
Steve Thompson's previous Doctor Who work has been...flawed to say the least. The Curse Of The Black Spot was dull and even his first episode of Sherlock (The Blind Banker) wasn't as good as Steven Moffat and Mark Gatiss' work on the show. He wrote the finale to Series Two of Sherlock (The Reichenbach Fall) which was very good so it was difficult to say whether this episode would be good. The trailers for this episode were...dull to say the least and the clips were a bit too short. This episode, however, was surprisingly good.
It opens as the Doctor tries to get Clara to 'bond' with the TARDIS - a funny scene well acted by Matt Smith and Jenna-Louise Coleman that really highlights the two characters.
However, the Van Baaleen brothers are introduced and come across as well, annoying. Ashley Walters guest-stars as Gregor, and is as wooden as hell. I do not believe his character whatsoever and it is amazing that he is apparently more famous than Smith and Coleman, des…
Post a comment
Read more

April 23, 2013
In Neil Cross' second (or first I should say) episode, the Doctor and Clara journey to Caliburn House, where Major Alec Palmer (Dougray Scott) and his assistant Emma Grayling (Jessica Raine) are investigating the Witch of the Well, a spectre that lurks in the house.
This premise is fantastic, and could easily fill the 45 minute time slot. However, extra bits are added about the ghost (which is clever) and a rather lazy and dull romantic sub-plot revealed at the end between the two creatures.
The cast are fantastic, and we are treated to the best supporting cast in the series so far, with the exception of Hila, who is given little to work with. The dialogue is very good but Matt Smith spoils the show by pronouncing 'Metebelius' wrong. *sigh*
Despite this being her first episode as Clara (with the exception of 'Asylum of the Daleks'), Jenna-Louise Coleman is very good and gets actually scared. One of my complaints with previous companions is that they don't seem …
Post a comment
Read more

Doctor Who: The Doctor The Widow And The Wardrobe (2011)

April 19, 2013
So, imagine Christmas 2011. The excitement for Sherlock Series 2 on New Year's Day, a new episode of Doctor Who (the last for a while) and some fat bloke coming down your chimney. Oh well, who does The Doctor The Widow And The Wardrobe hold up?
The episode begins with the Doctor escaping an exploding spaceship. As much as this sequence utterly destroys the ending of Series 6 - with the Doctor becoming more withdrawn - but it is still a fun scene to watch. Who cares about science? It's science fiction - the suspense of disbelief is all you need, and funnily this bit pulls it off brilliantly. A perfect introduction to the episode.
Then, the Doctor is found on Earth by Madge Arwell (played by Claire Skinner, the mum off Outnumbered) and taken back to the TARDIS (eventually). In this bit we are introduced to Alexander Armstrong (Mr Smith from SJA!) as the dad, of whom is the first wasted guest star. I'll talk about Lily and Cyril later.
From then on, we are told that the fathe…
Post a comment
Read more

April 14, 2013
The episode starts out with a Soviet Submarine armed with nuclear missiles, as Captain Zukhov prepares to launch them. However, he is interrupted by a professor (David Warner) and the plans are postponed until the next day. Then we find the professor’s assistant in the lower levels of the ship cutting open the ice to find a creature inside. But, the creature inside wakes up and strangles him. Cue – opening credits [that still need fixing]. I'm writing this review upon first viewing, but I can’t remember if this guy turns up again or not, so I have to presume he is dead. Once the titles are over, we find the Ice Warrior has escaped the ice and is causing damage to the ship. The sub is crashing as the Doctor and Clara save the crew, via the SONIC SCREWDRIVER!!! How many times is that used for anything? This opening is so fast, and its difficult to tell what’s going on. What are we meant to be focussing on? Clara drowning, the Doctor drowning, the crew drowning, the Doctor and Clar…
Post a comment
Read more 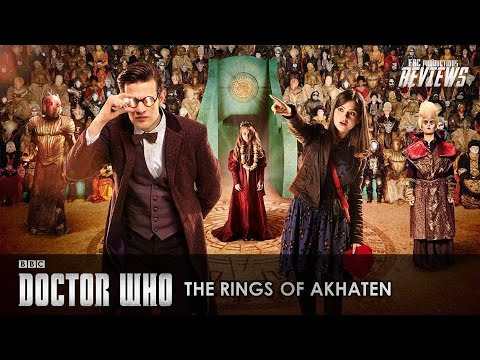 So, The Rings of Akhaten by Neil Cross, a mix of The End of the World, 42 and A Christmas Carol (only a hell of a lot better than those episodes, although The End of the World was average).
Neil Cross has surpassed himself as a Doctor Who writer, but this is his second script for the show. His first is yet to be seen in Hide. There are nice little references to the Classic Era as well as a tantalising hint at where the Doctor and Susan went before going to Earth.
Matt Smith seemed to be barely in this episode, and not the main focus, which made a nice contrast after last weeks' episode seemed to be all about the Doctor, and not Clara. He is not rendered useless, although I find it hard to believe that it takes Clara as well to help stop the Old God. He has seen all of time and space as well as parallel dimensions, E-Space and the birth and death of the cosmos!
Oh well.
The actress playing Merry Gejelh, Emilia Jones, was fantastic, and struck a nice balance between having a charact…
Post a comment
Read more
More posts