Showing posts from May, 2015
Show All

As Agents of SHIELD draws closer to its season finale, the tension racks up this week for our heroes. Set just after the events of Avengers: Age of Ultron, which the series doesn't fill in for those who haven't seen the film yet - an episode with our Agents fighting the Ultron drones bringing them together would have been great to see, but alas, Agents of SHIELD's large problem - being a not particularly popular TV show spin-off to $150-250,000,000 movies.
Ho-hum. If you have watched Age of Ultron though, its revealed through a little opening flashback that it was Coulson's mysterious Theta Protocol all along to help the Avengers - begging the question as to why Coulson didn't get a small cameo in Avengers to tie it all in, but maybe it would have been too much for the movie. SHIELD tie-ins in the movies would be awesome Marvel!
Anyway, this scene is soon mostly forgotten, along with Sam Koenig as SHIELD has banded together in the wake of Age of Ultron's devas…
Post a comment
Read more

"Grodd Lives"
This episode had the Flash fighting a giant, telepathic, telekinetic gorilla called Grodd, who hated bananas. I didn't think that was what I was going to be typing about any TV show, let alone The Flash.
The big talking point of the episode was Grodd himself, who was brilliantly realized through some excellent CGI work and lighting, and the voice was a terrifying accompaniment. While I did feel the ending was a bit of a cheat, it kinda made sense, and there couldn't be too big a final showdown, especially considering this is only one episode of a long-running TV show. That said, I really enjoyed the Grodd segment of the episode.
The Eobard / Eddie scenes were quite interesting though, with many teases to the future and as to Eddie's role in the show. Yes, they were very talky, but they needed to be, and Tom Cavanagh couldn't help but steal the scenes.
Overall, Grodd Lives was a bit cheesy, but had its scary moments and certainly challenged what …
Post a comment
Read more 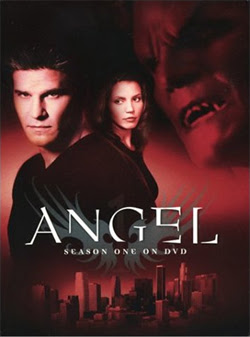 I wasn't initially intending to do these articles, but seeing as I have spent the best part of a day starting watching Angel, I thought I would solve my boredom problem with writing my thoughts on the few four episodes of the Buffy the Vampire Slayer spin-off.
While it took me a while to really get in to Buffy (not that it helped with each season ending with such a big epic finale that its amazing there was a following 22 episodes, let alone multiple seasons more), Angel has gotten me interested within four episodes, displaying much more of the expertise creator Joss Whedon had gained from working on Buffy and homing these skills in on a more adult series following supporting character Angel. Angel is a very different beast to Buffy the Vampire Slayer, detailing a character of whom we as an audience still don't know that much about, and being much more of an adult detective show than a teen high school fantasy drama that its parent show was. This really does work in Angel'…
Post a comment
Read more 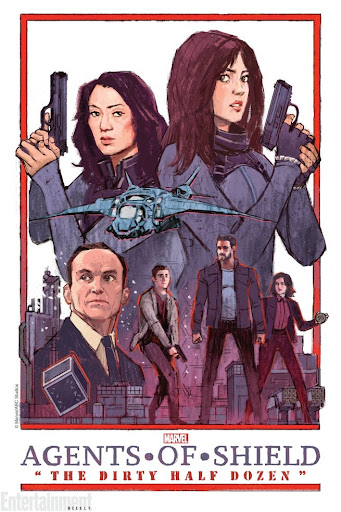 This week on Agents of SHIELD its all about forgiveness - Skye's mother forgiving Cal, the team not forgiving Ward for his betrayal, and how this can lead down darker paths. Ward even manages to show how much Simmons has changed from the end of Season 1, with her becoming more violent to try and kill Ward.
It was nice to see the old team back together, even if it was only for part of the episode, as the scenes between them were the highlight of the episode, and one of the highlights of the season so far. The planning scene on the bus was fantastic to watch for all the glares at Ward, and the final gag of the scene did make me chuckle.
It also showed how far the characters have come since the Pilot, even if it shows how quickly the series has got through these arcs.
The tie-ins to Avengers: Age of Ultron were good, with Loki's sceptre and Ultron being set up through Coulson retrieving data on Strucker's Sokovia base for Maria Hill.
Overall though, the episode was a fantast…
Post a comment
Read more

Agent May is a character I've never been particularly fond of. She had her awesome badass moments, she had some great lines and the actress always seems to be having fun playing her. However, what is her deal recently? Is she betraying Coulson? Is she really siding with the 'real' SHIELD - or just SHIELD now, with Coulson and co on the run. What's her game? I have no idea and I hope this gets explained soon. The series is hard enough to follow with three million plot points as it is. Adding a new one in won't help.
Anyway, I want to focus on the good of this episode - the scenes between Cal and Skye/Daisy are brilliant. Not just incredibly well-written and well-performed by the actors, but also feeling like the most natural and human interactions Agents of SHIELD has ever done, maybe even being the most human of the whole MCU, but having not seen Dardevil, I want to give that a chance.
The scenes just felt so nice and natural. Cal's constant disappointment abo…
Post a comment
Read more

"Olicity" - really getting boring now guys. You were setting up Laurel as Oliver's love interest, weren't you? So why do we have Felicity instead? The romance she had with Ray works better than with Oliver!The ending - what?! We all know Oliver will return for Legends of Tomorrow, Arrow: season 4 and a crossover in The Flash: season 2, so why bother? Also, Olicity.What happened to Roy? You didn't have the guts to kill him, but you were quite happy to write him out of the series with no return in sight...its not like he was going anywhere character-wise anyway.Ra's al Ghul / the plan - Ra's al Ghul became a really boring villain really quickly. Seriously, the writers have no idea what to do with him. And his plan? That was stupid. It also felt underwhelming after the three-part mid-season opener with Danny Brickwell. Both felt rushed though. The writers need to think of a good finale for next year.Maseo and Tatsu / Hong Kong - …
Post a comment
Read more

Holy moly...
While Arrow may have dropped in quality in Season 3, it hasn't stopped it getting a fourth season, a fantastic spin off called The Flash but also a third show in the shared TV Universe continuity called DC's Legends of Tomorrow!
While yes, it does seem like DC are now going to do the whole Marvel thing of putting the company name as part of the title of the series, I'm pleased to see that Legends of Tomorrow looks absolutely brilliant.
Time-traveling rogue Rory Williams - I mean, Rip Hunter - must assemble a disparate group of both heroes and villains to confront an unstoppable threat to the planet…and to time itself, because time is always at risk in time travel stories.
Anyway, this looks to be a really interesting show. I'm interested to see how Arrow and the Flash figure into the team, and I'm surprised Roy's exit from Arrow wasn't to set this up as Arsenal, but the team looks good so far, consisting of the Atom, Hawkgirl (a new character to th…
Post a comment
Read more

Supergirl is a character I've never really understood. I always thought the whole concept behind her was pretty bland and it makes sense that the trailer for her own TV Series should look pretty bland too. Supergirl is about Kara Zor-El, Kal-El's cousin, who, 12 years ago when her home world of Krypton was destroyed, was sent by her parents to Earth, where Kal-El was sent. 12 years later, she finds herself trying to remain normal as incredibly difficult, with her cousin Kal now a hero named Superman who has been essentially showing off his powers and saving lives. This convinces her to join him as her own superhero, and calling herself Supergirl, Kara decides to follow in her cousin's footsteps.
First problem: who thought of this? Who thought this didn't sound like a pretty knaff idea? Sure, maybe if Supergirl was Superman's daughter, I could see this working, but Superman's cousin, who just so happened to be the only other person to be sent away from Krypton …
Post a comment
Read more

One of the slightly annoying things about a long-running series without standalone episodes is that you always feel like your reviewing a mere segment of the story, analyzing Part Three of a five part story, where you've done the beginning and you're stuck in the middle with no end yet.
At long last the story of how Agent May became known as the Cavalry was revealed, and I felt rather underwhelmed by it. Not only did it not seem quite as big a deal in the flashback sequences, but I felt it didn't have much focus for such a big story to tell. The final twist in the tale for May was really good, and it certainly explained what changed her into the character we met back in the Pilot, as well as what happened between her and Andrew, but otherwise lacked the interesting arc I would have liked to have seen.
Otherwise, the plot of this episode was nil. SHIELD are searching for Coulson, with May and Simmons trying to figure out if the 'real' SHIELD have a point about Coul…
Post a comment
Read more

***CONTAINS SPOILERS FOR THE EPISODES***
"Tricksters"
Tricksters balances two big Flash stories in one - the revelations as to who Harrison Wells really is and Barry's struggle to understand him; and the return of the Trickster - a villain from the 1990 The Flash series played by Mark Hamill - teaming up with his son to perform the ultimate trick. Of course, this ultimate trick is thwarted very early on in its process, and James Jesse and son are almost forgotten by the episode's Harrison Wells flashbacks, revealing how Eobard Thawne in fact merely looks like and pretends to be Wells, using the "lies" Wells as said as almost half-truths, about his wife and his moving to Central City. This is really interesting to see play out, but the two plots don't merge well, resulting in two large story-lines not getting enough time for one another to play out. A bit of a wasted opportunity, overall Tricksters is a very enjoyable episode of The Flash with a stellar pe…
Post a comment
Read more 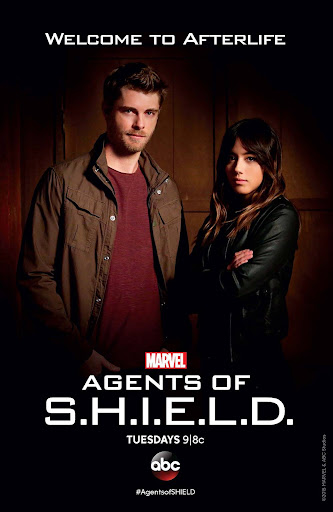 This week on Agents of SHIELD, Coulson is on the run from SHIELD and with the help of Hunter and a returning Mike Peterson (AKA Deathlok) in order to find Skye, who seems to be hidden by Gordon in a mysterious place. It certainly seems to be an interesting route for Agents of SHIELD to go down, with SHIELD being the enemy as well as the protagonists, and using the much more super powered world as a basis for the characters' decisions. Its an interesting story that is far more interesting than the SHIELD vs Hydra we had from the middle of Season 1 to Season 2's mid-season opener. I do look forward to seeing how this all ties into the movies...
...although from a recent interview with Joss Whedon, I'm interested to see what happens to Agents of SHIELD. Whedon reportedly said that Marvel Studios really aren't happy with the show to the point where they are not treating it as canonical, which is deeply worrying for the series, especially given its many tie-ins to the Marv…
Post a comment
Read more
More posts