Showing posts from November, 2013
Show All

November 30, 2013
EPISODE 7:
This episode was something different, seeing Jason's reaction to the fact that he can never be with Areadne, and his entering the contest, which showed a different side to Hercules which was an interesting watch, but these 'royal' episodes seem to be randomly spread throughout the series, and Mino's involvement in the whole series is a little odd, as despite being the king of Atlantis, and has no character to him. 8/10

EPISODE 8:
This was an interesting episode focussing on Pythagoras and his brother and their troubled relationship. The only real problem with the episode is that the true revelation is very predictable and a little clichéd. There are also some strange and irrelevant parts of the story that are just randomly there for a bigger cast. 7/10

EPISODE 9:
This episode is my favourite episode from Atlantis at the moment. The whole story is a great build-up to the ending scene where at long last Medusa became a Gorgon. Uh, spoiler alert. The build-up w…
Post a comment
Read more 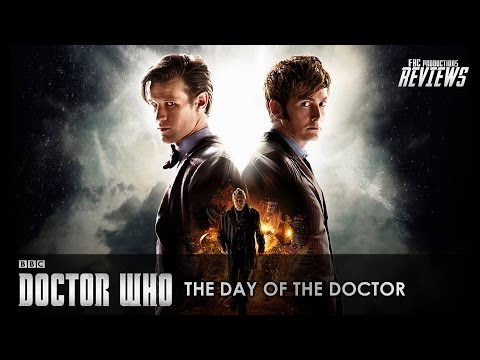 November 30, 2013
I really enjoyed this episode. Not only did it explain the history of Agent May and why Coulson was so keen for her to join the team, but it also focussed on the human elements in a very extreme world of aliens and superheroes, which Agents of SHIELD needed to do to succeed away from the Avengers as its own programme. The revelation that there are no telekinetics or invisible men was also nice as it was a twist that was needed and works in a world such as the Marvel Universe, adding to the more real human elements of the story. I'm also glad Skye wasn't pushed aside so much this episode, as she is the most 'human' out of all the characters and is a main character of the series as much as Coulson is. 8/10
Post a comment
Read more

November 26, 2013
So, with no classic Doctors in the 50th (Tom Baker excluded), Peter Davison, Colin Baker and Sylvester McCoy try and get into The Day of the Doctor themselves, with hilarious consequences. The sketch is so brilliant and funny and entertaining and clever and what a cast!

Peter DavisonColin BakerSylvester McCoyPaul McGannTom BakerDavid TennantMatt SmithJenna ColemanSteven MoffatRussell T DaviesNicholas BriggsFrank SkinnerGeorgia Moffet (Tennant)Sean PertweeOlivia ColemanPeter JacksonSir Ian McKellenJohn BarrowmanAnd MORE! This shows genuine dedication from all involved and the whole thing, although made with a budget of two pence looks better because it doesn't do anything it can't do. Sylvester McCoy abandoning Peter Jackson and Sir Ian McKellen on the set of The Hobbit? Done. The Doctors nicking their coats from the Doctor Who Experience? Done. It's even partly filmed at the Doctor Who production studios! I would love to see more of these but this at least was sheer perfect…
Post a comment
Read more

November 24, 2013
The eighth episode saw Ward suffer anger issues as Coulson and co. search for an Asgardian staff.
This was a bizzare episode but suffered from a lot of explaining at the end, particularly about Ward, although the end credits scene was creepy. There was a lack of character focus as well, particularly on Skye. 6/10
Post a comment
Read more

November 24, 2013
Doctor Who now celebrates 50 years, at long last with a budget, and in 3D cinemas...so why are there so many missed opportunities? There are no classic Doctors to start off with. The Five(ish) Doctors Reboot beats them in that the only two Doctors missing are Eccleston and Hurt in terms of appearance. There was a perfect moment at the end. They were all filming stuff literally next door to The Day of the Doctor, but not even Paul McGann (who appeared in the prequel) made an appearance. It was clear from The Five(ish) Doctors Reboot that they all wanted to do it, but then when we finally see Tom Baker (awesome moment), it turns out he is a Doctor from the future or something along those lines. Couldn’t he have just been...Tom Baker? The Fourth Doctor? This is a huge letdown for the episode. Who cares that they’re a bit old. It didn’t bother them for Tom Baker, and The Five(ish) Doctors Reboot proved that they can all be the Doctor again. Who cares if they’re old or fat or losing hair? F…
Post a comment
Read more

November 17, 2013
Episode 7 sees Ward and Fitz go on a Level 8 Mission, and as Skye and Simmons soon realise, a suicide mission.
This is an interesting and engaging premise, and it shows genuine character progression carrying on from previous episodes for Fitz, and I'm really beginning to like his character a lot more now. Simmons, however, really bugs me and I hope she gets replaced soon as she's just irritating. I'm not the only one finding this as everyone watching the last episode at my house felt disappointed that she didn't get killed off, and now she seems to lack any strength as a character that Skye and May have, which brings her back into a stereotypical female role in many ways.
The interactions between Fitz and Ward were great and I really felt the two characters had evolved by the end of the episode, and Coulson's realisation about what happened to Skye's parents is really interesting, and him stopping before he finishes his slightly hypnotic sentence of "Tahit…
Post a comment
Read more

November 17, 2013
These are my 20 favourites. They may not be the best, but they're great viewing for me. In no particular order I give you:

November 14, 2013
"The Night of the Doctor" sees Paul McGann return to the role of the Eighth Doctor after seventeen years as an adventure goes wrong, leading him to his demise on Karn...
This story is a taste of what Doctor Who would have been like with McGann at the helm in 2005, and the mix of classic and new Doctor Who works brilliantly. This show just how much McGann is a brilliant Doctor. He isn't too quirky, although he might have the odd line, and he comes across as a truly damaged man, showing the transformation between him and 'The War Doctor', played by John Hurt, whose reflection has been aged-lifted, making his appearance in "The Name of the Doctor" and "The Day of the Doctor" show just how aged he is from the Time War.
It was nice to see the Sisterhood of Karn return with their Alexia, last seen in "The Brain of Morbius" back in 1976. Also, it was interesting to see Cass's hate for both Time Lords and the Daleks when the Doctor revea…
Post a comment
Read more

November 11, 2013
***CONTAINS SPOILERS***
Episode 6 of Marvel's new Television series saw Agent Coulson and the team tracking down an elusive killer, soon revealed to be a disease caught from a Chitari helmet.
The episode had a very intriguing start with SHIELD tracking down this killer, and how they were trying to work out what actually happened to those victims was very interesting, so when it turned out it was a disease from a Chitari helmet, it was even more of a twist to the episode.
My one problem with the episode was simply the fate of Agent Jemma Simmons. This was an ideal opportunity to kill her character off, and it really built up to that, so when Ward saved her, I, among my relatives in the room, was very disappointed. An ideal opportunity missed, as not only was her character pretty annoying, but also it would be a great new element that would not only change the team but also leaving Agent Fitz alone, and developing his character further. It would be more tragic if Fitz found the cure…
Post a comment
Read more

November 07, 2013
After the fantastic Iron Man 3 (2013) earlier in the year, Thor: The Dark World (2013) follows on from Marvel's Avengers Assemble (2012) and Thor (2011), both of which were very good films. The Dark World was truly brilliant though. Right from the off, there is change in place. Marvel now have a new title card, although I preferred the last one, which looks quite flash with a theme for it. I hope we can have original film music playing over it where necessary in the future, as it does work for films like Iron Man 3 (2013) with "I'm Blue". The darker tones of this movie are brilliantly placed alongside some great comedy, with Joss Whedon's fingertips all over some scenes. The comedy makes the darker tones less grim (and they would be very grim without any humour) and the darker tones allow the comedy to have more impact on the audience. The music is by Brian Tyler, who composed the score for Iron Man 3 (2013), and it has a great impact. Easily the sad music (&quo…
Post a comment
Read more

November 04, 2013
I'm still not a massive fan of the series, but it is growing on me. Here is my scores for the past three episodes:

EPISODE 4:
An episode made mostly for laughs sees the trio and Medusa looking after a baby, who Pasiphae wants dead, but why?
A very entertaining episode with plenty of laughs to be had, but some poor green screen really takes you out of the action. Atlantis' best episode so far, without a doubt. (9/10)

EPISODE 5:
An episode that focusses on Areadne's character a bit more, and explores her history with her brother, and builds up suspicion for Pasiphae...
The episode is quite interesting but adds very little to Areadne's character, which I had hoped. It explained why she hated her mother so, and Alexander Siddig got to do a lot more as Minos. Areadne's brother seems a bit odd all of the way through, and you are not sure exactly whether to trust him or not. This builds on a strange arc, but the series is steering away from the actual 'Atlantis' e…
Post a comment
Read more
More posts