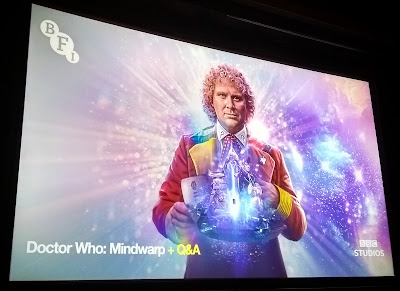 With Doctor Who: The Collection - Season 23 releasing on Blu-ray on 7th October 2019, a special preview event for the boxset took place at the BFI Southbank on 14th September, including a screening of 'Doctor Who: Mindwarp', alongside a Q&A and signing. I was very lucky to attend, and was able to watch the extended edits of the four featured episodes, as well as some clips from some of the extras on the boxset, including 'The Doctor Who Cookbook Revisited', 'Behind the Sofa', an outtakes reel and two specially-made trailers for the Blu-ray.

'Mindwarp', for those who don't know, is the sort-of-nickname given to 'The Trial of a Time Lord' Parts Five through to Eight. 'The Trial of a Time Lord' itself was the umbrella title given to Doctor Who's twenty-third season, airing after an eighteen month hiatus (during which it was briefly cancelled by Michael Grade), which consisted of fourteen, twenty-five minute episodes. As with most seasons of Doctor Who at the time, the Season 23 was initially broken into four serials - 'The Mysterious Planet', 'Mindwarp', 'Terror of the Vervoids' and 'The Ultimate Foe' - with the 'Trial' storyline running throughout. However, the episodes were all later titled under the umbrella title of 'The Trial of a Time Lord', making it (technically) Doctor Who's longest-ever serial.

A sequel to the previous season's 'Vengeance on Varos', writer Philip Martin returned to pen 'Mindwarp', incorporating his original villain Sil (played by Nabil Shaban). Framed as part of the Doctor's trial, 'Mindwarp' is a direct prequel to the season, with the "modern" Trial segments interspersed throughout. The main 'Mindwarp' story itself sees the Doctor (Colin Baker) and his companion Peri Brown (Nicola Bryant) investigating the origins of a mysterious device found on a previous unseen adventure. Arriving on the planet Thoros Beta, the two time-travellers find themselves caught up in a sinister experiment to prolong the life of their old foe Sil's boss, Lord Kiv (Christopher Ryan). As events spiral out of control, it becomes clear that not everyone will make it out alive.

'Mindwarp' is perhaps the darkest Doctor Who story ever told. It's very morbid, with lots of death, sinister experiments and a rather black sense of humour. "If I die, you'll be killed - or worse, poor" exclaims Lord Kiv to his partner Sil, in a moment that received a good laugh from the audience at the BFI. This sense of humour runs throughout, and is contrasted by Brian Blessed playing a warlord known as King Yrcarnos. According to the people who made this story, the performance in the final episodes was "understated" by Blessed's standards. His performance was so scenery-chewing that our viewing of Part Three/Part Seven (depending on how you're counting) cut-out part-way through one of his scenes. It wasn't even his most over-the-top scene at that.

I've always found 'Mindwarp''s dark tone to be a bit of an oddity in Doctor Who. It's a story I haven't re-watched since purchasing the DVD a number of years ago, and when I first saw it, I honestly found it to be a genuinely uncomfortable watch. A few years later, the story has a lost a lot of that initial impact, but there is a sense of dread to the whole thing, as though you feel something awful will happen by the end. When the story does conclude, it's quite shocking, and somewhat upsetting too. I'm not sure if Doctor Who has ever had such a dark ending to a story. Despite this, 'The Ultimate Foe' (the concluding "story" in 'The Trial of a Time Lord') does its very best to soften this downbeat ending, much to the irritation of the actors, as it turns out.

The production is generally a mixed bag, with some scenes looking very studio-y (a particular problem in 80's Doctor Who), and some scenes being very nicely under-lit. Some of the make-up and costumes look great (such as Sil, Kiv and their assistants), and some look awful (such as the alien Sil and Kiv do business with, who got a big laugh). The exterior scenes on Thoros Beta really showcase the incredible talent of the team, managing to transform the beach location into a very alien-looking world. There are a few moments where you can see the creases, and part of that isn't helped by watching the story on a massive cinema screen, but it is very impressive for the time nevertheless. Richard Hartley's music was re-recorded for the new surround-sound mix, and sounded wonderful. Hartley himself attended the screening, and his Q&A was brief, but insightful, and he seemed to be enjoying revisiting his work thirty-three years later.

Generally I've found the restoration work on these Blu-ray releases to be very inconsistent, with the screenings of 'Logopolis' and 'Earthshock' looking incredible, and 'Genesis of the Daleks' and 'Planet of the Daleks' looking noticeably weaker, due to their age. As 'Mindwarp' was entirely shot on video, there's no 16mm film scenes for the team to restore to full HD, and thus the whole thing doesn't look as nice on a big screen, but the restoration team have done a very good job here with the materials available to them. It's always a pleasure to watch Doctor Who on a big screen, and I wouldn't mind seeing some more recent episodes at the BFI. The surround-sound mix was fantastic though, and worked brilliantly at the screening. I loved hearing Dominic Glynn's eerie rendition of the Doctor Who theme play through the speakers. 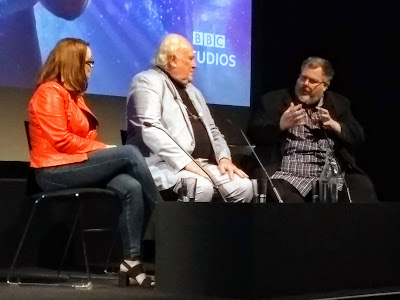 After the episodes finished, we also got a preview of some of the extras, including a very amusing outtakes reel, a Masterchef-spoof centered around the 1980's Doctor Who cookbook and a Gogglebox-style commentary on 'The Mysterious Planet' with various Who stars. The Q&A with Richard Hartley (composer) and Mark Ayres (sound mixer/restorer) was nicely informative, while a brief talk with the actor who played the Raak was quite entertaining. A nice inclusion was getting to see the original Sil costume on-stage, sat on a chair as if he had just nodded-off, whilst the obvious highlight was the Q&A with Colin Baker (the Doctor) and Nicola Brynat (Peri). Both were on fine form, and very honest throughout their chat, including Colin's disagreements with certain members at the BBC, and Nicola's reasons for leaving the series. It was a delight to see a Doctor and companion on-stage at these events, and I was very excited to have them sign my DVD copy of 'Mindwarp' afterwards.

Overall, I loved the BFI screening of 'Doctor Who: Mindwarp', and really enjoyed not only revisiting a story I hadn't seen for a few years, but also the discussions with various people involved in the production. It was certainly a memorable event, and I look forward to not only purchasing the Season 23 Blu-ray, but also seeing 'Doctor Who: The Curse of Fenric' on 23rd November!
Doctor Who